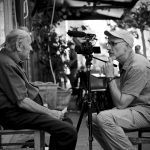 Born in Edison, NJ, Marc Kornblatt started out as an actor in New York City after college (Brandeis Univ.). He turned to playwriting, earned an MA in journalism (NYU), wrote for magazines and newspapers, published children’s books, married, moved to the Midwest, became a father and then returned to college in his mid 40’s to earn an education degree.

Teaching at an elementary school with a large underprivileged population, he began making music videos with students. That led to short narratives, documentaries and the founding of Refuge Films. He has since produced more than 150 short films, four feature-length documentaries — Street Pulse,  What I Did In Fifth Grade, In Search of America, Dostoevsky Behind Bars, and the award-winning web series, Minuteman.

In 2019, he moved with his wife to Tel Aviv, where he has continued writing for children and has produced the award-winning web series Rock Regga together with documentaries filmed in East and West Jerusalem, and the disputed territory around Bethlehem.